Since August 2007 I have been a monthly columnist for the St. Cloud Times. My theme, taken from the mission statement of the Collegeville Institute for Ecumenical and Cultural Research, is “the renewal of human community.” The columns are republished here with permission of the St. Cloud Times.

“How long have you lived in the St. Cloud area?” “What do you like most about it?”

These questions were recently posed to an eclectic group of about 20 residents.

I’ve been here 34 years, and like that the local newspaper takes “local” seriously enough to invite citizens to be regular columnists.

After many years away, Natalie Ringsmuth returned here nine years ago, and is glad to live in an area where we are challenged to work through the tensions, even when they’re overwhelming.

Leanne Loy has lived here all her life, has 78 first cousins (the one who lives in Orono is farthest away), and likes it because it’s, well, home to the family.

Tom Darnall, who has lived here 43 years, values the diversity in the schools his grandchildren attend. He appreciates the fine education his children received, but if the schools were now as predominantly white as they were then, he wouldn’t want to live here.

What Tom said made something clearer to me than it had been before.

The polarization that so bedevils us these days is not simply between those who resist, even resent, immigrants, and those who believe we should welcome them.

The dispute is not only about what makes a desirable community. It’s about the definition of “American.”

T. J. Stiles, who grew up in Foley and has won a National Book Award and two Pulitzer Prizes, recently wrote a New York Times opinion column, “The Constitutional Amendment that reinvented freedom,” on the 150th anniversary of the 14th Amendment.

Stiles credits the amendment with making the Bill of Rights effective for everyone. “It shapes almost every issue we debate today: immigration, racial and gender equality, voter suppression, free speech, corporations and federal power.”

Yes, the 14th Amendment “transformed and strengthened [freedom], codifying a universal definition of individual rights and national identity that has been an example to the world.”

But theory and practice do not always cohere.

“Many of us still have not internalized the idea that an American can look like anyone in the world,” Stiles writes.

“An American can look like anyone in the world.” This simple declaration hit me with the force of revelation. I suppose I’ve known it’s true, but I had never found words for it.

There was probably a time when I, a white male with a historically recognizable name, thought of myself as the definition of “American.” (I say “probably” because maybe I didn’t, though mainly because even if I did, I’d be ashamed to remember it.)

But: I don’t look any more American than my friends Jama Alimad and Brianda Cediel and Florence Orionzi and Malcolm Nazareth and Audrey Nguyen.

This last is the one I’m familiar with, the one that makes Jesus look like me (if I grew a beard and long hair). But: Jesus can look like anyone in the world. For me, as a Christian, this is why I want to live in a place that’s as diverse as can be.

A visual portrayal of the diversity that is already here has recently been installed at the entrance to the St. Cloud Public Library. 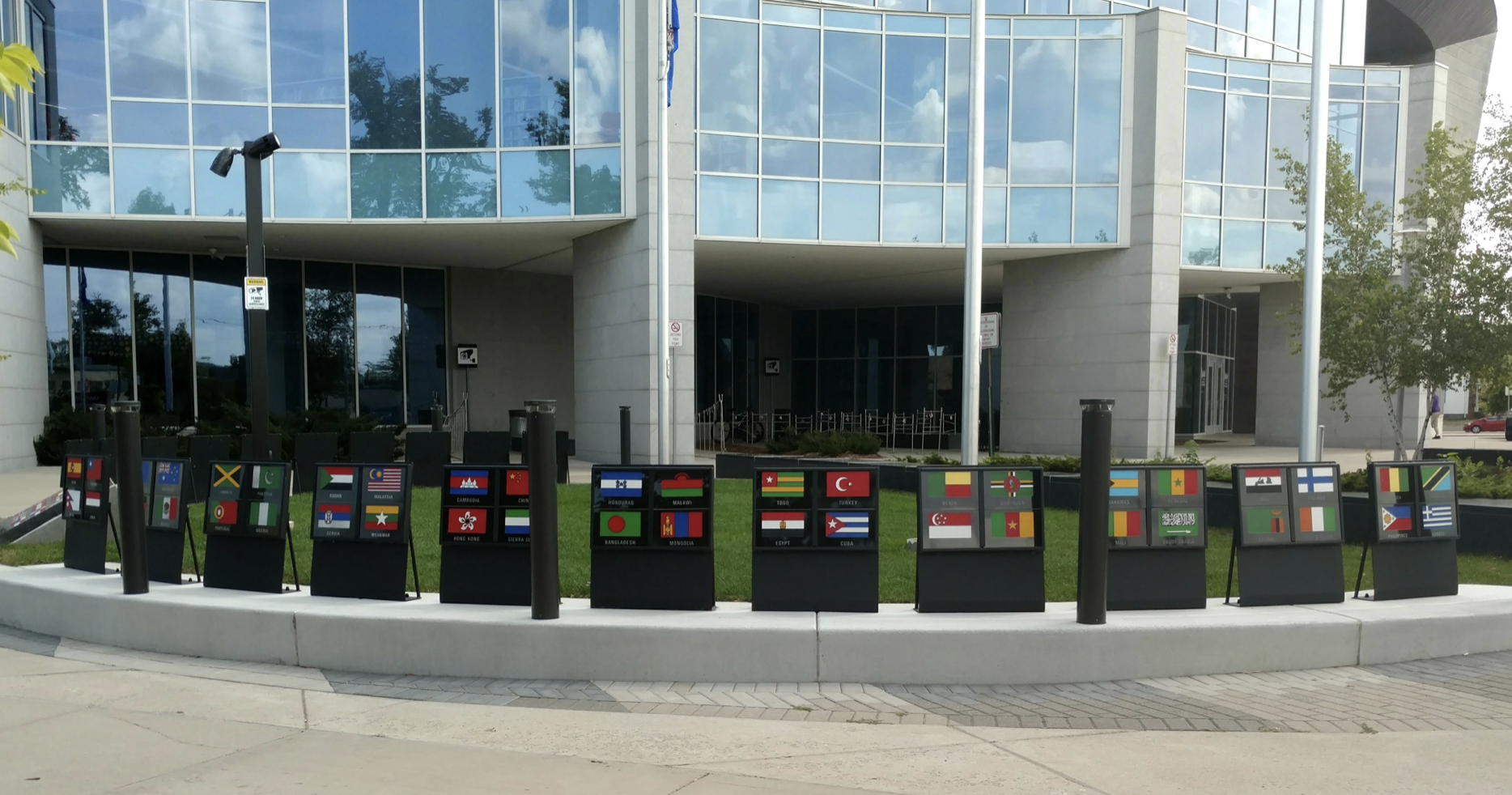 “From many nations we are one community,” the monument says.  And the centerpiece continues: “This monument represents the nations of people that lived, settled, and built the foundation of St. Cloud before 1880.”

At the top are the Dakota and the Anishinaabe/Ojibwe, followed by flags of 15 European nations and Canada.

But that’s not all. “As our city grows, granite markers will be added to this corner representing the lands from where we come.” And spreading out in two directions from the centerpiece are the flags of 84 other countries, from Africa and the Middle East and Asia and Australia and Latin America, and, yes, additional ones from Europe.

Put them all together, and it’s more than half the members of the United Nations. 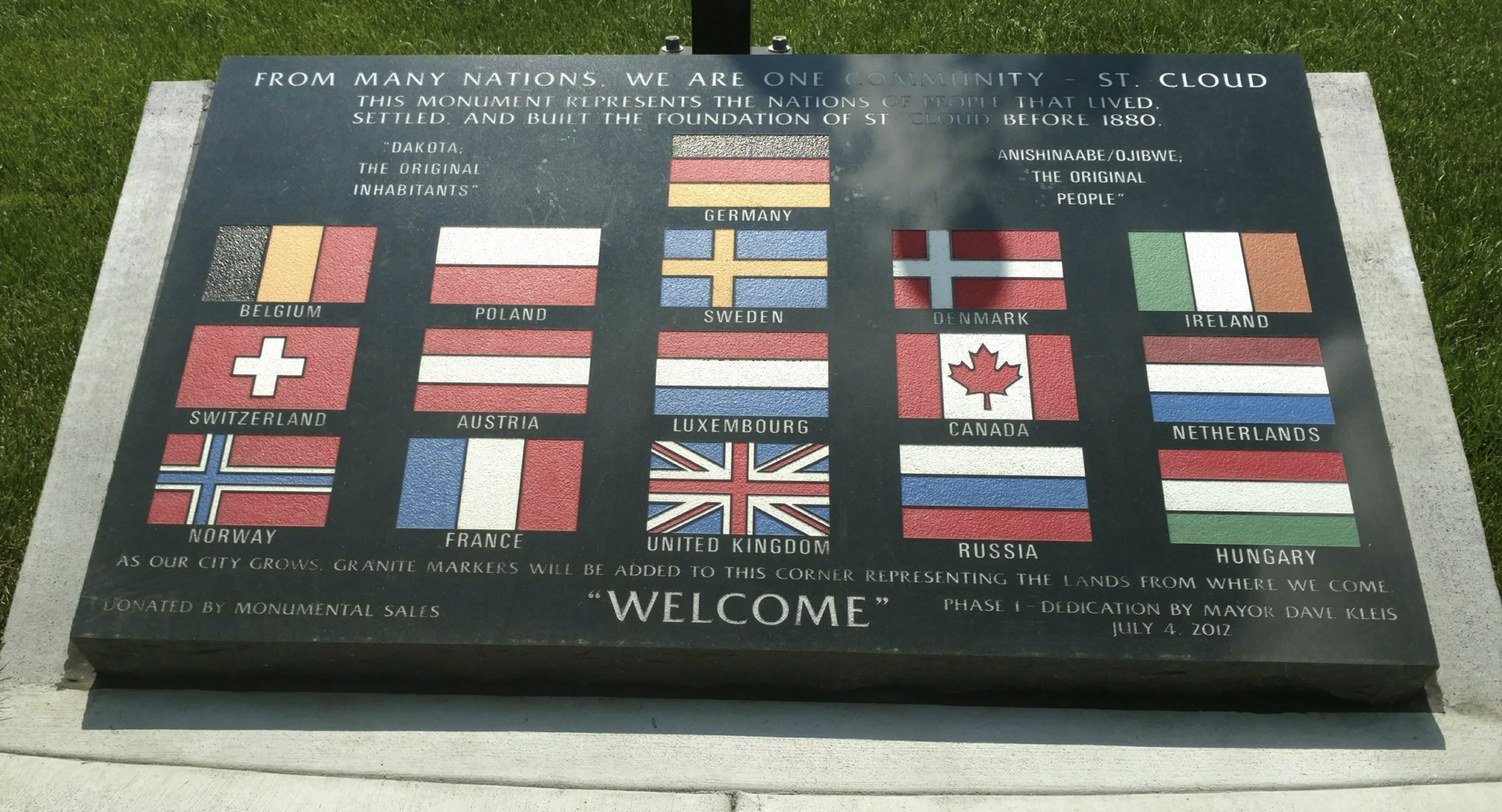 You’ve seen the TV ads from the company that analyzes a person’s DNA to determine ancestral makeup — to the individual’s astonishment.

The monument at the library is the cultural and spiritual genome of the St. Cloud area. The components are far more than we imagined.

A big reason I like living here is that we can look like anyone in the world.

#180, July 2022: Voters need to press GOP candidates on whether they stand with Trump or truth

#177, Apr. 2022: Waite Park is enlisting its stakeholders to build its future

#176, Mar. 2022: Benedictines live an example of how to govern through diversity

#173, Dec. 2021:The choice to remain unvaccinated for COVID lets doctors, nurses down

#169, Aug. 2021: There's help for the hard discussions that our community needs to have

#168, July 2021: Human events brought us to this point, which means we can change course

#140, Mar. 2019: Children's museum another example of city's inclusion and unity

#139, Feb. 2019: One Minnesota Equity Blueprint charts path to thrive together

#137, Dec. 2018: Locally, there are ways to fight sexual exploitation, trafficking

#126, Jan. 2018: First Amendment a bedrock of democracy, but some things should be off limits

#122, Sep. 2017: Catholic-Protestant connection shows we can get along