‘Shining like the sun’: Glimpses of a new way to see one another 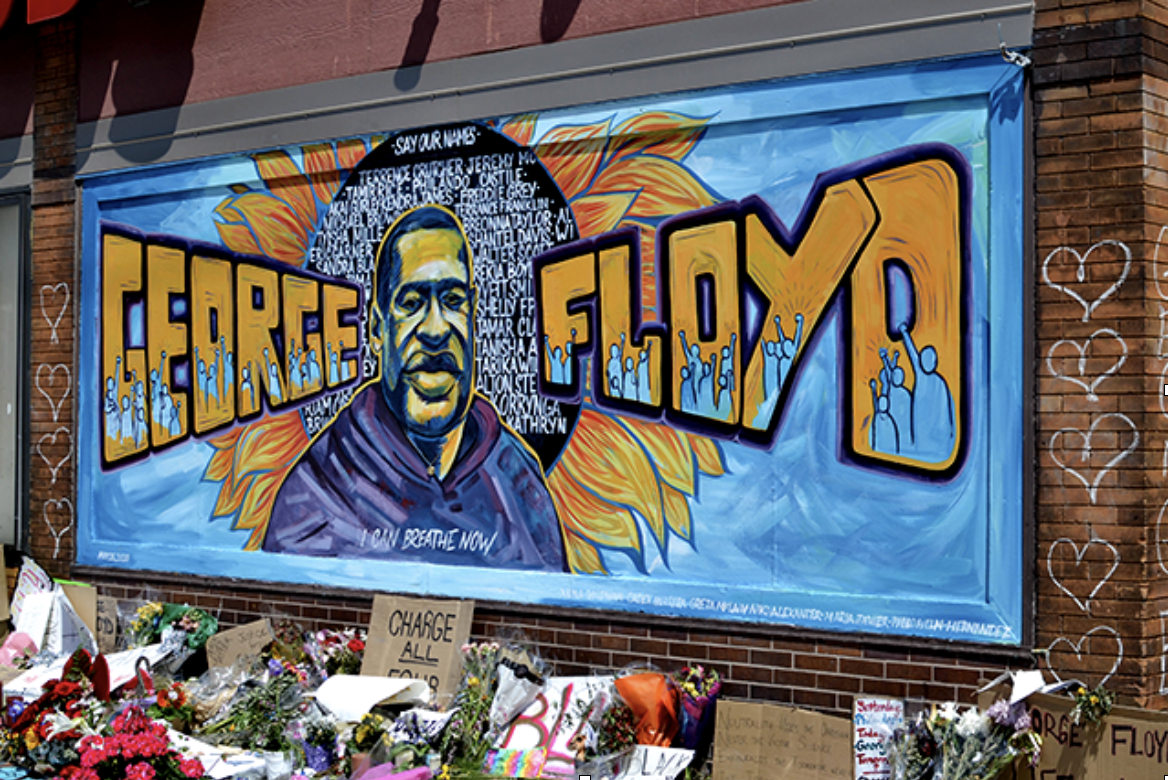 In the mural on the wall of Cup Foods, George Floyd is surrounded by a sunflower – illuminated from inside – and by the names. Thomas Merton wished: “If only we could see each other that way all the time.”

By Patrick Henry
Published October 12, 2020 in the Community Voices section of MinnPost (and here by permission)

A mural honoring George Floyd on display outside of Cup Foods in Minneapolis near where he died.

Thin places. Where Earth and heaven bump into each other, and the membrane is permeable. Thin places are strewn all over Ireland.

You don’t expect to find them in Louisville or New York.

As Thomas Merton recounts in “Conjectures of a Guilty Bystander,” in 1958 the veil was lifted for him at the corner of Fourth and Walnut in Louisville, the center of the shopping district – a far cry from his hermitage at nearby Gethsemani Abbey.

“I was suddenly overwhelmed with the realization that I loved all these people, that they were mine and I theirs, that we could not be alien to one another even though we were total strangers.”

He had been tempted by the thought that he, as a monk, was a special sort of person, not just different.

“It was like waking from a dream of separateness, of spurious self-isolation in a special world. … There is no way of telling people that they are all walking around shining like the sun. Then it was as if I suddenly saw the secret beauty of their hearts, the depths of their hearts where neither sin nor desire nor self-knowledge can reach, the core of their reality, the person that each one is in God’s eyes.”

He knows the challenge is formidable: “If only they could all see themselves as they really are. If only we could see each other that way all the time.”

About half a century later the veil was similarly lifted in New York for David Brooks, like Merton a prolific writer and influential commentator on social and cultural life, but unlike Merton, not a Trappist monk.

One morning, he tells us in his 2019 book, “The Second Mountain: The Quest for a Moral Life,” Brooks was getting off the subway in Penn Station at rush hour.

“I was surrounded as always by thousands of people, silent, sullen, trudging to work in long lines. Normally in those circumstances you feel like just another ant leading a meaningless life in a meaningless universe. Normally the routineness of life dulls your capacity for wonder.”

“Normally …” – that’s how things are just before you stumble on a thin place.

“But this time,” Brooks reports, “everything flipped, and I saw souls in all of them. It was like suddenly everything was illuminated, and I became aware of an infinite depth in each of these thousands of people. They were living souls. … Souls in each and every person, illuminating them from the inside … and with that came a feeling that I was connected by radio waves to all of them – some underlying soul of which we were all a piece.”

“Suddenly,” “shining/illuminated,” “overwhelmed/flipped,” “depths/hearts/souls,” “could not be alien/connected by radio waves.” To convey what they knew when the veil was torn away, both Merton and Brooks quarry the thesaurus for unfamiliar words and images, or overused ones that can be rejuvenated.

In a time when religious language has been weaponized, it’s refreshing to come across retrievals of ancient truths. Merton and Brooks demonstrate that mysticism is fundamentally realistic, the antithesis of sentimentalism.

If Louisville and New York, why not Minneapolis?

We have a thin place right here: the intersection of 38th and Chicago.

Yes, thin places can also be where Earth and hell bump into each other, but after the murder of George Floyd, everything – or at least lots of things – flipped. All sorts of people everywhere started making good trouble.

Black Lives Matter insists that we are not alien to one another even if total strangers. The names – names that must be said – that were painted on the street and inscribed on the gravestones in the nearby virtual cemetery are reminders of the core of their reality, the person that each one is.

In the mural on the wall of Cup Foods, George Floyd is surrounded by a sunflower – illuminated from inside – and by the names. Merton wished: “If only we could see each other that way all the time.”

At its thin place – 38th and Chicago – Minneapolis’s veil was lifted, and the whole world got in on the sight. First we saw into the heart of darkness. Now we’ve got to work – like hell, so to speak – to keep the light shining like the sun.